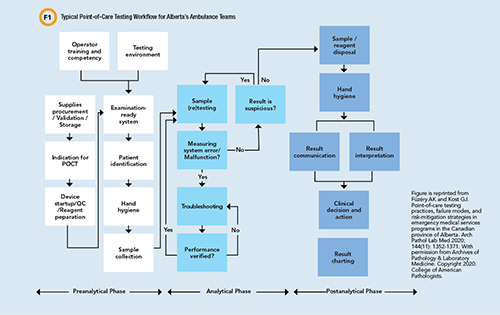 To test use of dry swabs, researchers used a pool of SARS-CoV-2 positive specimens to inoculate flocked swabs. They immediately placed flocked swabs into UTM after inoculation and ran tests. Meanwhile, the researchers put 15 swabs into sterile 15 mL conical tubes and incubated them at room temperature—some for 1 day, some for 2, and some for 7 days. The researchers repeated the protocol for vital transport media (VTM) and saline.

For comparison, they also prepared a series of swabs and tested them in parallel. However, the researchers stored these swabs in the corresponding liquid transport media UTM, VTM, or saline and incubated them at room temperature. They then tested the swabs at 1, 2 and 7 days after inoculation, and in duplicate. They performed all testing using the Roche cobas SARS-CoV-2 assay.

Results from dry swabs tested at days one, two and seven were within two cycle thresholds (Cts) of the average Ct values for swabs hydrated in the same media and tested on day zero. The researchers found no statistical difference in Ct values for swabs incubated in liquid media versus those incubated in dry swabs at room temperature prior to hydration in liquid media.

The researchers noted that the stability of SARS-CoV-2 nucleic acid on dry swab specimens warrants further study of the new specimen collection and transport technique.

PDAC is one of the most solid lethal tumors, with most patients diagnosed at an advanced stage when surgery is no longer an option. The only currently useful biomarker
for monitoring PDAC patients after surgery and during other treatment—carbohydrate antigen 19-9 (CA19-9)—is nonspecific.

Previous studies involving PDAC cell lines or patients have note that some of these proteins are associated with or involved in the disease. IL8 and IL10 are elevated in patients with PDAC and correlated both with each other and with IL6, a well-known prognostic biomarker in PDAC. IL8 is a proinflammatory chemokine. Its expression is stimulated by various cytokines, hypoxia, and reactive oxygen species. Activated intracellular pathways leading to IL8 expression include NF-kB, PI3K-AKT, and p38 MAPK. They are also known downstream signaling pathways of activated KRAS, the oncogene activated in more than 90% of PDAC tumors. Regulatory T cells in the tumor microenvironment secrete IL10, contributing to a local immunosuppressive environment in PDAC tumors.

The researchers call for a formal prospective test of the panel’s clinical utility in the initial phase of diagnosis alongside the normal diagnostic work-up for pancreatic cancer.

A recent study concludes that glycated hemoglobin (HbA1c) is still an important biomarker for maternal and neonatal outcomes in pregnancies among people with type 1 diabetes (Diabetes Care 2021;44:681-689).

To shed light on which metrics, used at which time points, would best predict pregnancy outcomes, researchers assessed how well HbA1c, CGM metrics, and alternative biochemical markers for type 1 diabetes detect pregnancies at risk for suboptimal outcomes. The researchers randomized participants who were pregnant or planning pregnancies to real-time CGM with CGM or capillary glucose monitoring alone for diabetes management. Women in the capillary glucose monitoring group also had short periods of masked CGM to allow comparison of CGM metrics between groups.

Of 225 participants who gave birth to live infants, 157 gave at least one additional sample for laboratory testing of alternative glycemia markers, including fructosamine, 1,5-AG, glycated albumin, and gCD59.

The researchers found that HbA1c, CGM metrics, and alternative laboratory markers of glycemia all identified pregnancies at increased risk of suboptimal neonatal outcomes, even from the first trimester. However, neither laboratory markers nor CGM metrics provided strong prediction of any pregnancy outcome. Markers and metrics mostly had areas under the receiver operating characteristics curve (AUROC) of 0.70.

Alternative laboratory markers did not appreciably increase the AUROC for predicting pregnancy outcomes more than widely available HbA1c or CGM metrics, such as time within and above target glucose range.